A story in four chapters presenting the potential for a fast-forward in evolution through a guided tour.

When I awoke, I did not find either my companion or the sage. I knew why I woke up with a start though, because I had somehow become very sensitive to sounds, and there was indeed a tremendous racket. Wherever I looked I saw identical looking birds making a loud unpleasant sound and generally seeming to be fighting with each other. It was not at all cold and there were no large mountains around. I seemed to have mysteriously changed into a small mite of some kind and was cosily perched over the plume of one of the birds. My eyes began to focus better and I found two more mites beside me. I knew at once that one of them was the sage and the other the worker bee.

I learnt from the sage that overnight we had drifted down southwest about two hundred and fifty kilometres and were at Sultanpur bird sanctuary and that we were in the middle of a flight of birds known as common terns. I found the typical member of the group to be about 12 to 15 inches long from the black tip of its sharp red beak to the ashen grey tail-end. It had a greyish white body with a striking black top covering all of the head up to just below the eyes, and lovely red feet too. The tail was forked and the outer web of the outer tail feathers provided a grey border to a paler grey breast and underbelly. I was told that these were mostly summer adults and that the few among them which had blackness only in the hind part of their crowns, mottled backs, shorter tails and a distinctive dark mark on the inner fore wing were juveniles. The sage told me that winter adults were like summer ones in all respects except the colour of the head in which they resembled the juveniles. When I asked him why there were no winter adults in this flock, he told me that they had already gone home to Liverpool. Was Liverpool up in the hills where we came from, I asked and was told to my great astonishment that it was a cool 8,000 kilometres away. 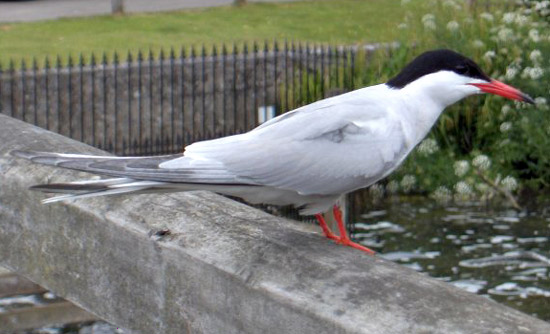 Year after year these cousins of my host bird travelled this distance in April to England and returned in October-November, when they felt that they could not take the extreme cold anymore. Some of the summer variety however had preferred to stay on in Haryana, especially near lakes and marshes where they were assured of an abundant supply of fish.

I was curious about the cacophony and the fights that seemed to go on and on and was told that the noises were made by male birds keeping other males from approaching their mates. The fights were also in the same cause. The tempters seemed to approach their quarries with good-sized fresh fish dangling from their beaks and were not averse to cheating when the fish were not so fresh by re-dipping them in water before approaching the potential mate. They almost invariably failed, because only relatively old females were known to shift their partners around, getting every year a younger replacement for their mate. Outwardly, to me at least, the males and females looked the same.

I saw too an amazing division of labour when the male partner brought fish for his young, but these were fed to the young only by his lady. Only very rarely did a female entrust the actual feeding of the young to the male. My observation of a mother in this act of possessive love was rudely interrupted as my host, who had been a silent sentinel of his unit up till now, suddenly took off at great speed to give all he had to an intruder who had been ogling his wife. All three of us had to cling to him with all our strength to avoid being blown away.

Our saintly master’s gentle words were like a steering nudge, “I want you both to forget that you started off as bees, or that you are required to be in the form of mites today and some other creatures tomorrow. This is because I have provided both of you with superb awareness. Whether you are awake or whether you go to sleep, this awareness will stay with you throughout the duration of your training. And while you will note and record in your inner being all that you see, feel and hear, significant qualities which have the potential to confer leadership status to the being who has them will have to be branded on your mind-screen, whenever you come across them in the course of our journeys. I will also underline and emphasize them on such occasions for you. What do you think of the winter-adult terns travelling thousands of kilometres twice every year? Remember, the terns have the option not to return home in summer. They can stay on in sub-tropic climes all the time! In fact, some of them do precisely that. Only some of them though. Think!”

My companion thought more data on such compulsive flyers was in order. She posed her question straightaway. She asked Master, “Sir, are the common terns the only birds which keep flying between temperate and cold zones every year?”
“Not at all, Nari. Yes, that is the name I am going to call you by while your princess-friend will be called Rani. Every year nearly 100 migratory bird species arrive here in search of feeding grounds and to pass the winter. In winter the migrating birds include greater flamingo, ruff, black-winged stilt, Siberian crane, common teal, common greenshank, northern pintail and northern shoveler. Then we have yellow wagtail, white wagtail, rosy pelican, gadwall, wood sandpiper, spotted sandpiper and spotted redshank. Eurasian widgeon, black-tailed godwit, starling, blue throat and long-billed pipit also arrive here in winter. In summer about 11 species of migratory birds such as cuckoos, central Asian koel, black-crowned night heron, Eurasian golden oriole, comb duck, blue-cheeked bee-eater and blue-tailed bee-eater come here. This season I find that the foreign bee eaters are not here and none of the other birds local or visiting will eat you up, either, I shall vouch! How is that for a particular trait among several of these creatures in flight, not to give up home and not to give up comfort, and being willing to exert themselves for the double advantage?”

Nari, who was not listening with full attention, seemed to have spotted a black-crowned night heron and checked with Master whether indeed she was right about its identity. When he said yes, she asked him whether we could all go back to that bird’s home along with him/her. Master laughed and said that they would all have to wait for several months before this lonely marauder decided to go back home. “Look at the way she is slouching by herself on the leafy low branch there,” he said, “she will start foraging at night very sluggishly, waiting in key places for a passing frog or fish that may pause. She may also plunder the nest of another heron, because she is lazy. She would love to take her chicks along and visit this colony of terns in the night also to plunder food. I thought you girls were looking for some good examples! Let us talk about terns. Common terns, like the ones before us and other extraordinary terns, I mean.”

He paused and continued, “The common tern does not take a winter holiday in places like Haryana. In fact the tern is very well adjusted to the cold climate at home, whether it is Liverpool, England for this group, or any other cold country well away from the tropic s. The bird has learnt to put up with cold surroundings, provided a good meal is assured for the family. The mother as the guardian of the young can motivate the male partner to keep finding the food so the young ones are also fed properly. They leave in groups for warmer climes not for the warmth but knowing locations where similarly food supplies are adequate. Instances are not wanting where they may just go from one cold place to another. In all this activity, clearly the guidelines come from the female heads of nest-families. The male, the father, has to keep moving to procure food and the female knows his motivation as the favours he expects to get from her in return. She has to feed the chicks and herself from what he brings.”

“Men who study the migrations of birds mark the birds by a process called ringing,” continued the sage, “which provides the individual bird studied a distinct number as well. By this method a common tern has been found to have travelled 17,639 km (10,963 miles) north to south, non stop! An arctic tern, which is slightly different
from the common tern, has shown greater stamina and there are frequent recordings of flights exceeding 30, 000 km, for instance from Maine in north America, via Africa all the way down to Antarctica! It is known too that freshly hatched chicks accompany their parents on such a trip, stay back for two years and are able to navigate themselves back home unaccompanied by guiding elders! Birds known by the name sooty shearwaters have been tracked recently as they made their way back and forth across the Pacific Ocean. Tracking the birds by satellite, scientists found they would make a round trip of about 70,000km over 200 days in search of food, averaging 350km per day. While several flocks undertake these flights around the same time, the number of birds in a single flock is usually a fixed number for a given type of tern. How this selection takes place is not fully known and it is possible to speculate about some individuals chosen by female family-heads, acting as leaders in flights for each flock.” 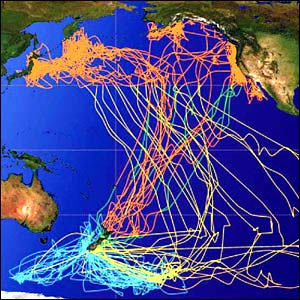 “Nari and Rani, are you able to get at the full significance of this specially evolved quality? You will note that the terns and other birds making these extraordinary annual two-way flights demonstrate capability in a strategy involving

There is an old epic legend among the people of this country about a great king named Rama who was a real treasure-house of enviable leadership qualities. The narrator of the epic, a sage named Valmiki, talks about his dharmarakshanam, namely the quality of upholding of one’s duties for optimal benefit to an entire community with no harm to anyone concerned. Don’t you see something similar in the capacity of the terns to travel as a community, giving their food sources time for replenishment and having a mechanism to train their young in their survival methods?”

Both of us silently signalled that we followed, though neither of us would have known how mites were supposed to signal such understanding, if they had to.

After R & D and technical management experience of over three decades in petroleum and organic chemical industry, have been devoting the past fifteen years to the study of Tamil and Sanskrit classics, including dharmic works and doing some serious translation work. Have been a significant contributor to the medha journal almost since its inception upto 2013 and expect to continue my association with it.