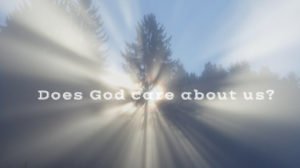 The terrible state of the world, the terrorism, injustice, etc, gives rise to the question as to whether God cares about humanity. Atheists usually argue that absence of any evidence for a caring God suggests that there is in fact no God. What is the Hindu position on this issue?

God cares about all of humanity. However, as a rule God remains detached from the universe.

Resorting to Prakrti, Nature, which is My own Power, I send forth again and again this multitude of beings that are without any freedom, owing to Nature’s sway over them.

These activities do not in any way bind Me, because I remain detached like one unconcerned in their midst.

Under My direction and control, Nature brings out this mighty universe of living and non-living beings. Thus does the wheel of this world revolve.

So people who are engrossed in worldly affairs and do not care about God are left alone by God. These people are under the sway of the theory of Karma. God only distributes the fruits of karma of these people. It is immaterial whether these people believe or disbelieve in God.

Whoever, being devoted to Me solely, engage themselves always in contemplation and worship of Me – to such eversteadfast devotees I ensure the procurement of all their wants (moksha) and the preservaton of their assets (worldly interests).

An analogy might be useful to understand the difference between the 2 cases. Imagine many people traversing the ocean of the world in their sail boats. The breeze of Divine grace is always blowing. People who are engrossed in worldly affairs do not raise the sails of their boats to take advantage of the breeze. They are busy trying to make their boats  pleasant to live in. Hence their boats do not cross the ocean of the world. People who do spiritual practices raise their sails to catch the divine breeze and hence speedily attain moksha.

I did my school, college and parts of my University education in Kolkata. I got my M.Sc degree from Kolkata University. I went to USA in 1979 and got my M.S and Ph.D in Physics from University of Pittsburgh in 1984. I did my Post Doctorate in University of Southern California, Los Angeles and then worked as a Research Scientist in the Department of Physics, Astronomy and Space Sciences Center of University of Southern California. My scientific work includes heavy ion-atom scattering, multiphoton ionization and heliosphere data analysis of Pioneer 10/111 and Voyager 1/2 deep space spacecaft and analysis of solar extreme ultraviolet data obtained from SOHO spacecraft.  I have been a National Aeronautics and Space Adminstration (NASA) Principal Investigator from 2002 – 2007. I have been a member of a NASA awards committee to decide allocation of money to different scientists. I have also refereed scientific articles submitted to Journal of Geophysical Research and Astrophysical Journal.

Is the Truth One? So what if the wise call it by different names?

Self Examination Saturdays: Where Mythology Meets Mysticism – Alchemic Seer
February 19, 2022 @ 8:32 PM
Like the cream that floats...

This website uses cookies to improve your experience while you navigate through the website. Out of these, the cookies that are categorized as necessary are stored on your browser as they are essential for the working of basic functionalities of the website. We also use third-party cookies that help us analyze and understand how you use this website. These cookies will be stored in your browser only with your consent. You also have the option to opt-out of these cookies. But opting out of some of these cookies may affect your browsing experience.
Necessary Always Enabled
Necessary cookies are absolutely essential for the website to function properly. This category only includes cookies that ensures basic functionalities and security features of the website. These cookies do not store any personal information.
Non-necessary
Any cookies that may not be particularly necessary for the website to function and is used specifically to collect user personal data via analytics, ads, other embedded contents are termed as non-necessary cookies. It is mandatory to procure user consent prior to running these cookies on your website.
SAVE & ACCEPT