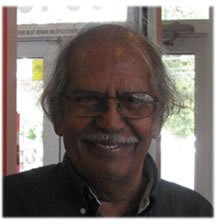 As you know an absolute cannot be described.  To describe anything, one must put it in relation to something else.    Faced with the possibility of describing Rama I must find another physicist.   I choose Professor Sudarshan. Now we all know and expect to see Professor Sudarshan in a plenary session.  Why because he is great! Now for Rama we find him in plenary sessions not because he is great. It is out of respect for others.  If Rama were in a concomitant session with three other speakers they would be talking amongst themselves. So, it is not because Rama is great that he is put in plenary sessions it is out of respect for others.

In continuing to lightly roast Rama we could say that Professor Sudarshan knows how to dance the dance and knows the meaning of elsewhere.  That is why he is present. Whereas Rama cannot dance and is here and not there.

I was first introduced to Rama at an earlier Vedanta Congress by Professor George Sun.  He told me Rama is like-spirited. I must say that if George were here speaking today there would be no time for anyone else to say anything at all!  At the time George gave me a first edition (1975) of Rama’s book Fundamentals of Indian Philosophy.

I found that there is clarity in this book.  Rama takes very elegant systems of thought and expresses them in a way that is easy to understand.  Students really like the book. I instituted a course at University of San Francisco entitled the same as the book: Fundamentals of Indian Philosophy.   I have also assigned Rama’s book on Jnana Yoga in a meditation course I teach. The fundamentals text help one in further understanding Indian thought.  For those so intellectually inclined the Yoga text is a journey to enlightenment. It also sets the ground for the practice of other forms of Yoga.  Again, students find much clarity in this book too.

This presentation then is entitled, “Ramakrishna Puligandla: The Teacher and his View on Philosophy and Culture.”  I will attempt to elucidate what Rama embodies and then in one paragraph I will display his thought on philosophy and culture.

Rama embodies Indian spirituality; Buddhist mindfulness; and Taoist spontaneity.  All three are lived. Now let me present three themes that all of you here will be able to see in any great teacher.  These three themes are: personality; compassion; and thoughtfulness.

Compassion can be seen in the way Rama is oriented in helping others.  Rama is here to help. Rama is approachable and one feels comfortable in his presence.  He has helped me personally, which I have really needed just recently and academically.

Both personality and compassion are basic to great teachers but one must know one’s material to help others.  You have all seen in the last few days of the congress how Rama amplifies thought with direction. Rama speaks in every session giving helpful comments.

Now with one paragraph we see with clarity Rama’s view on philosophy and culture:

“To understand a people and its culture is to understand how it sees the world, itself, and other peoples; and unless and until members of each culture approach the philosophies of others with an open mind and study them seriously, there will be neither the understanding of other peoples nor the enlightenment and enrichment of one’s own philosophy and culture that can only result from such understanding.” 1

Is the Truth One? So what if the wise call it by different names?

Self Examination Saturdays: Where Mythology Meets Mysticism – Alchemic Seer
February 19, 2022 @ 8:32 PM
Like the cream that floats...

This website uses cookies to improve your experience while you navigate through the website. Out of these, the cookies that are categorized as necessary are stored on your browser as they are essential for the working of basic functionalities of the website. We also use third-party cookies that help us analyze and understand how you use this website. These cookies will be stored in your browser only with your consent. You also have the option to opt-out of these cookies. But opting out of some of these cookies may affect your browsing experience.
Necessary Always Enabled
Necessary cookies are absolutely essential for the website to function properly. This category only includes cookies that ensures basic functionalities and security features of the website. These cookies do not store any personal information.
Non-necessary
Any cookies that may not be particularly necessary for the website to function and is used specifically to collect user personal data via analytics, ads, other embedded contents are termed as non-necessary cookies. It is mandatory to procure user consent prior to running these cookies on your website.
SAVE & ACCEPT