We knew this day was coming.

We ‘d discussed this earlier and we had been waiting…for what had seemed like an eternity.

Still, I find it hard to believe that the dark skinned baby is in my arms.

He, my brother-in-law, looks at the baby one last time, as he is reluctant to leave.

He has to get back to his dreary cell now…his eyes fill with tears.

With trembling hands he touches the baby once and says “Remember, they would be after him, once they know he’s here!”

I look at his tired face and nod.

He sobs suddenly, overwhelmed by the weight of all those years of pain .I put an arm around him.

Only the newborn knows why this man and his wife had to suffer so much, losing six children as soon as each one of them were born , and losing a seventh one in a …strange manner. You won’t believe that if I told you.

The darkness some hearts possess! Why did his wife’s brother do this to them?

I hold the baby tight against my chest, thinking about the perilous journey he had made on the first night he was born.

Did you cross the Yamuna, little one? The heartless rain God was beating down on the earth,, the sky had burst open, why did they make it so difficult for you?

The baby seemed to smile.

No! Newborns don’t smile like this! I may have been childless, but I am not totally ignorant about babies!

But this one is no ordinary newborn, he isn’t crying, he seems to waiting for the two of us to say a few things to each other before we took leave of each other.

I look at his face and wonder what I did to deserve this gift.

It’s temporary, I know that, but still hard to believe that this one is mine for as long as it takes…for times to change.

The bearded, sad looking man is holding my newborn daughter, I touch her little feet as a kind of farewell…

We have worked out a kind of exchange between ourselves.

“I know, no harm will come to her…she’s special.”

She too, I …don’t think she’s an ordinary newborn.

She is someone else.

As the prisoner on bail is about to leave, the tiny hands of the newborns touch each other just for a second…

Only they know what messages they exchanged just then.

I bend down and kiss my daughter one last time, she seems to smile.

I don’t know what sort of babies these two are…they make some team!

But, despite myself my cheeks are wet with tears too…

Still, I console him, I say everything happens for a reason and this is some script and we are mere actors.

He smiles for the first time, holds my daughter tight, kisses her and walks out of my house in the pouring rain… 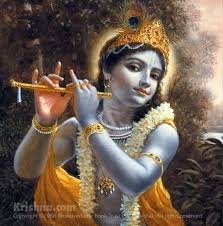 She too has waited, she too has shed bitter tears, she too had been just waiting for this gift…but, for now, I needn’t say it’s temporary, should I?

For, ours is just a safe house for this newborn a baby we just exchanged for our daughter who would go in to the prison with her new father and meet her new mother…

No ,the dark-hearted one killed six of their babies but he just won’t be able to kill her…She is NO ordinary baby, mind you!

Something tells me this night is unlike any other…

This borrowed new born is, for the moment ours, mine and Yashoda’s , a time would come for him to liberate all of us and we ‘d gladly bid him good bye then..

He belongs to the world.

We are just his custodians or caretakers till he grows up…

May Narayana give me the strength I’d need to bring this baby up without any attachment. It seems overwhelming to comprehend now, but let me take one day at a time.

But she need not know any of this now, she has waited for years, let her enjoy his baby antics for as long as it lasts…

Fathers can accept these things better than mothers can…fathers are strong.

No point in letting the tears flow, let me wear a smile on my face , wake her and tell her she is a Mother after all these years of waiting.

This can be read as a sequel to the verses posted here and here.